The European Union is drafting a regulation for the classification of sustainable finance products, the so-called Taxonomy. This sounds boring and bureaucratic, but it is actually one of the most significant projects of recent years and an important building block of the Green New Deal. Accordingly, the natural gas and nuclear lobbies, as well as various European countries, are trying hard to have their dirty technologies classified as sustainable. It‘s their ultimate attempt of greenwashing – with implications far beyond the financial sector and disastrous consequences for the climate and the environment.

In this webinar, we present the current state of the taxonomy, look at its meaning, and highlight the impact of gas and nuclear lobbies on the process. We examine the role of the EU member states and their backstage bargaining – and we will discuss the role of the climate justice movement in this context.

The taxonomy shows: it is important to address even this seemingly boring endeavor. Together, the climate justice movement must scandalize the processes around the taxonomy and increase public pressure to prevent the inclusion of fossil gas and nuclear.

We are looking forward to meet you and to kick the gas and nuclear lobby in the ass!

The European Union is drafting a regulation for the classification of sustainable finance products, the so-called Taxonomy. This sounds boring and bureaucratic, but it is actually one of the most significant projects of recent years and an important building block of the Green New Deal.

Accordingly, the natural gas and nuclear lobbies, as well as various European countries, are trying hard to have their dirty technologies classified as sustainable. Against these forces, it is important to create public pressure to counter the possible inclusion of both fossil gas and nuclear power in the taxonomy !

As a first step, we organise two webinars on the current state of the EU-Taxonomy and the role of the climate justice movement in this context:  EU Taxonomy – Green Gas and Nuclear are dirty lies!

We are looking forward to meet you and to kick the gas and nuclear lobby in the ass!

NO MORE MONEY FOR NUCLEAR AND FOSSIL GAS!

The European Union is currently developing a “taxonomy”. What is behind this barbar word? It’s a regulation that sets criteria to determine which economic activities are eligible as sustainable financial investments. Lobby groups and governments are pushing heavily to include nuclear power and fossil gas under this label. This would open the floodgates to massive financing of these environmentally damaging energies. It is important to stop this now!

EU taxonomy: a classification of sustainable activities that will drive investments

The EU Taxonomy is an EU regulation that defines requirements for sustainable financial investments. It’s part of the EU ambition to create a greener financial system. It is meant to act as a kind of compass to guide investments into green and sustainable projects as part of the European Green Deal. The taxonomy contains various criteria for determining whether an economic activity can be classified as sustainable with regard to various environmental goals. One important rule is the “Do no significant harm” (DNSH) principle, according to which investments must be beneficial to the environment while not harming people or other environmental objectives.

Lobbies and governments are at work

The nuclear and gas lobbies like FORATOM and EUROGAS campaign heavily to water down the criteria in their favour. Governments that have nuclear programs (mainly France, but also Poland, the Czech Republic, Slovenia, Slovakia, Hungary, Bulgaria and Romania) exert influence for nuclear power to be recognised as a “green” technology

In contrast, the report of the Technical Expert Group (TEG) on the taxonomy, published in 2019, concluded that nuclear power does not qualify as a sustainable investment because it does not meet the “do no significant harm” rule – mainly due to the many unresolved questions regarding the disposal of nuclear waste. However, member states such as France, the United Kingdom (then still a EU member), and several Eastern European countries did not want to accept this assessment.

As a result, the EU’s Joint Research Centre (JRC) of Karlsruhe was commissioned with another expert opinion. The task was given to the Karlsruhe branch of the Centre, which is heavily linked with the nuclear industry. The resulting report was leaked to the public in March 2021. Unsurprisingly, this nuclear research institute came to the conclusion that nuclear energy does not harm people or the environment.,

This conclusion relies once again on the usual tricks of the nuclear industry: It tries to do away all problems with the help of future solutions that are far from being developed yet! It states the problem of nuclear waste will be solved, because it could be burried in geolocial deposits – something the nuclear industry has been proposing for centuries now. Similiarly, it states that future reactors will be safer than existing ones – while none of this reactors is already in operation and the few existing building sites are plagued by massive problems. The report also completely ignores the influence of climate change on nuclear power, for example regarding its water use. Many environmental organisations criticised this report, such as Greenpeace Europe, .ausgestrahlt from Germany and Global 2000 from Austria.

The survival of the nuclear industry depends on massive investments

In future, investments will have to meet the criteria of the taxonomy if they are to be advertised as ‘sustainable’. The EU taxonomy will significantly influence the financing and insurance conditions of projects and thus be responsible for financial decisions worth billions of euros. Thus all activities classified as sustainable according to the criteria of the taxonomy will benefit from huge investments, for example in the context of financial products such as sustainability funds, and will be able to apply for funding from EU support programmes such as the Just Transition Fund or the Recovery and Resilience Fund of the Green Deal. Banks and insurance companies, as well as other private sector companies, will most probable follow the taxonomy across Europe in determining what is and is not a sustainable investment.

If nuclear power is listed as a “green” technology within the EU taxonomy, nuclear projects, which have so far been impossible to finance privately, would have significantly better chances of realisation. The nuclear industry is facing a dizzying wall of investment: maintenance measures in the case of lifetime extensions, possible new construction of nuclear power plants or the generation of hydrogen using nuclear power, require huge investments. A clear exclusion from the taxonomy would significantly limit the financing possibilities of such projects, and bring the whole industry to a halt.

The softening of the EU taxonomy affects not only nuclear energy but also fossil gas in particular. The EU Commission had originally proposed that only gas-fired power plants with emissions of less than 100 grams of CO2 per kilowatt hour should be considered sustainable. These values require carbon capture and storage and carbon capture and use technologies that are relatively costly to implement. The governments of the Czech Republic, Croatia, Cyprus, Greece, Hungary, Malta and Romania continued to demand that higher values be considered sustainable. The German government also sees fossil gas as a necessary ‘bridging technology’.

Weakening the standards of the taxonomy jeopardises the credibility of the label. If financial flows are now diverted away from coal and oil due to the taxonomy, but lead to more gas and nuclear power plants due to the softened criteria, it would have fatal consequences for the environment, people’s health and the climate. Moreover, the lock-in effects of the misdirected investments would block necessary changes for decades. The mountain of nuclear waste would continue to grow, the nuclear risk would increase and – in the absence of effective measures – climate change would accelerate.

At the end of April 2021, the EU Commission decided to further postpone the decision on fossil gas and nuclear power. Both technologies are now to be assessed in processes that are independent of the remaining technologies. A decision ist expected by the end of 2021. From summer 2021, when the secret review of the JRC-report will be completed, nuclear power will once again be discussed in public. Some interviews even speak of possible decisions as early as June. However, the coordination processes behind the scenes will probably begin well before the final decision. That is why it is important to put pressure now against a possible inclusion !

The disputes over the taxonomy show the tensions within European politics. Within the EU, France, Poland, the Czech Republic, Slovenia, Slovakia, Hungary, Bulgaria and Romania are campaigning for nuclear power to be recognised as a “green” technology. Poland, the Czech Republic and Bulgaria, are currently planning to build new reactors – justified by the argument that this is the only way they can meet their EU climate targets.

Austria, Denmark or Luxembourg are strongly advocating the exclusion of nuclear power in Brussels. In contrast, the German politics does not show a clear line in regard to the EU taxonomy. Against the will of Germany, nuclear power will probably not be included in the taxonomy. However, there could be some kind of trade-off because Germany’s current policy shows interest in a listing fossil gas. Czech Republic, Croatia, Cyprus, Greece, Hungary, Malta and Romania are also pushing for softening criteria regarding fossil gas.

Therefore, it is important to put public pressure against the inclusion of both fossil gas and nuclear power in the taxonomy !

On this sad day of commemoration of the Fukushima disaster, we stand united against nuclear power: Don’t nuke the climate!
#dontnuketheclimate
#climatejusticeagainstnuclear 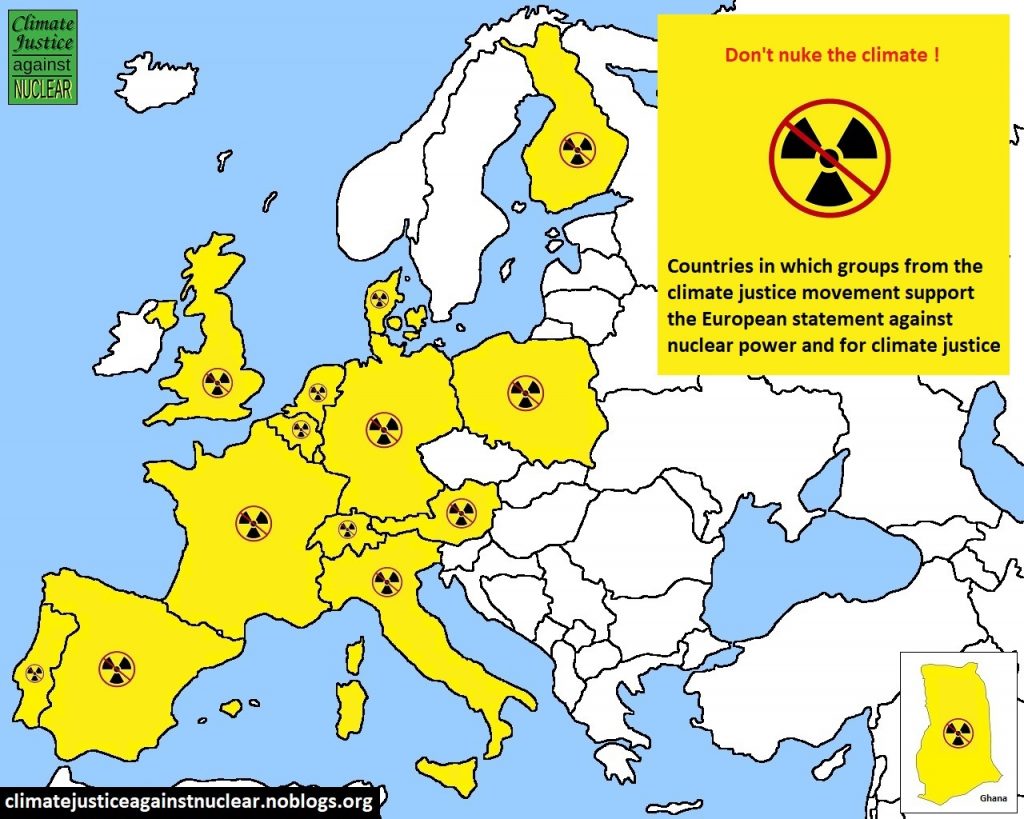 On the deadline March 1, 83 groups from climate justice movement in 15 countries have signed the Antinuclear statement. This is a great success and a strong sign against nuclear power.

The process for the statement started in 2020 at a meeting of the Climate Justice Action (CJA), a network of international grassroots mouvements fighting for global climate justice. The participants shared the analysis that the nuclear lobby tried to push for a renaissance of nuclear power as a solution for the climate crisis. The climate justice movement needed to confront this attempt with a strong united action. The statement is our first step against nuclear power.

The statement gets presented to the wider public on March 11, the 10th anniversary of the Fukushima catastrophe. Please share it in your networks and your (social) media.

The process of the statement is still ongoing. If your group wants to sign, write an email with the name of the group and the country to climatejusticeagainstnuclear@riseup.net 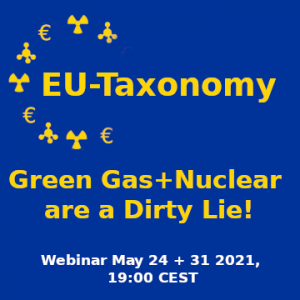